This might be confused with a double race report as it includes the details of two recent events, but as the title suggests, it is really only about how my training is going. That's because both of the recent events were purely for training, and as is always the case with training, there were some ups and downs...

After Challenge Roth (read that race report here) I bounced back into training quite quickly and felt good only a week after the event. This was good, because a week after Roth we hit the roads over the mountains to Alpe D'Huez, over-nighting in Albertville en route. The trip there was pretty uneventful, which is always good when you are riding for multiple days in a row. I felt great going over the mountains, even the substantial Col du Glandon which precipitated me convincing Brett to get me a last-minute entry for the Long Course race on Wednesday, rather than the short course on Thursday. A fateful decision.

The race started in the glacial waters as usual and it took me a while to warm up after the swim, but a steady effort put me with the leaders over the top of the first climb on the bike. Down the valley on the other side and over a few rollers the group mostly stayed together until some crazy descending left a few gaps. i chased the leaders who were a few-hundred meters up the road until I came to a sharp bend (they're all sharp, but this was particularly so) and was at the limit of my skill to stay on the road and not fall down the gulley off the edge. I admonished myself for taking risks and resigned myself to catching them up the next climb, and eased up a little. Another fateful decision.

About three switchbacks later, probably turning on a slightly different line due to easing my pace, my front wheel clipped a bottle-cap sized stone. Game over.

Long story short, I had substantial road rash, some gashes on elbow and knee (needing stitches - which were done road-side!) and I spent the next few days recovering, re-dressing wounds and feeling sorry for myself. 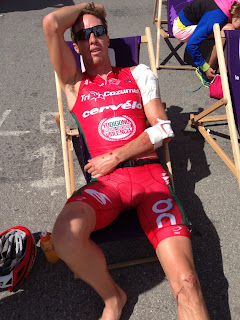 Luckily nothing was too serious and a week later I was back to full training. It was at this point that I was informed I had secured my Kona spot - in 41st place. Any more points would have been unnecessary and why do more than necessary, right? ...Right. And so training for Kona began in earnest and the next training event loomed. The decision to race was only made 5 days before as we made sure my stitched knee was ok, but Embrunman was a go...

Embrunman is a crazy race. Stupid even. And there were multiple times during the day when that was exactly what I was convinced of. Starting with a swim in the dark, where it seemed pretty much everyone went the wrong way - when you swim in the dark, all you can see is the splash of the person in front of you. If he is going the wrong way, you have no means of figuring that out. And so we zigged and zagged around the lake as the day dawned. I came out leading the group, but Todd Skipworth was long gone, apparently having swum faster (and less wrong) than the rest of us.

Todd was on a mission, and after 60km and few big climbs, we approached the base of the Col D'Izoard (a summit of 2360m) 10mins down on Skippy, but I was with Marcel Zamora and Herve Faure, between them having won this race 7 times so I was content. Zamora then started his mission, and I didn't see him again. Skippy's mission was derailed by a rolled tubular, Herve made it his mission to drop me, and I was starting to remember why this race is such a f*#%ing mission!

I did my own thing until T2, getting food and drink in and keeping a steady pace. I came into T2 in 4th, 16mins(!) behind Zamora, 7 behind Todd and 2 behind Faure. The first lap I ran controlled but solid, passed Todd having a conversation with a bush, then passed Faure for 2nd. It's rare for someone to come back in a race this long, but a few km's later Faure did that, with force. He flew by me, and soon was 2mins up the road. He stayed there until the end and I settled for 3rd. A (very) solid training day. 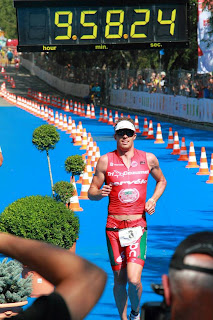 So now it is 8 weeks to Kona and all systems go. My body, although a bit beat up from Embrunman, seems to be all working well and adapting to the training load and I feel ready for the big push to race day. I can't wait to race Kona - it has been put off a few times but I now feel it is time. And of course being able to go with Jodie and share the experience will be great!