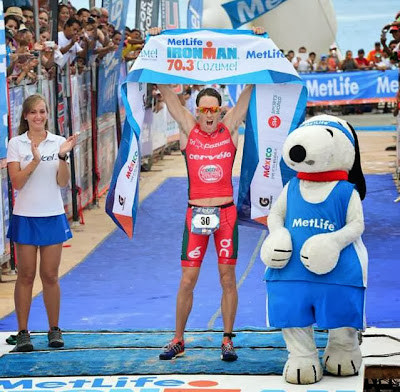 It started with DNS at 70.3 South Africa following a bike crash. This was improved upon (sort of) with a DNF at IMSA where things just went wrong - at least I started! Then things turned around and I got 2nd... three times! Second at Ironman Texas, 2nd at 70.3 Eagleman and then 2nd at Challenge Roth. While all of those were actually great results considering the competition, they just weren't wins. In the middle of a big block of training I raced Alpe D'Huez and crashed out, followed by Embrunman, with a solid 3rd place. Not wins, but they were just training after all. Then the mojo really started flowing...

On 1 Sept I raced Challenge Walchsee. I was not expecting too much coming off a big block of training and I was racing en route to Cozumel, but it turned out to be a good day.

A good swim saw me lead out the main pack (a first for me!), things didn't get much drier after the swim and through 90km of torrential rain I rode with Timo Bracht and Markus Fachbach, trying to not let Todd Skipworth build on his lead, while taking as few risks as possible in the treacherous conditions. Coming into T2 3mins down on Skippy Timo, Markus and myself ran together the first lap, after which I got a small gap and held it to the end, passing Skippy (who would hold on for 3rd) about halfway and beating Timo by only about 30seconds. A good days training! Jodie had a similarly good day of training and finished a close second to Yvonne van Vlerken.

Following that race I headed to Cozumel for the final Kona prep with Brett and the team. I had expected hot, humid weather interspersed with some heavy rain. What we got was more like heavy rain, interspersed with occasional pauses that didn't really last long enough for the heat to build, or even trip around the island (64km), resulting in many sessions in the rain. But it was warm rain and it sure was humid!

After almost three weeks on the island it was time for another test event, this time the Ironman 70.3 race which I had punctured out of last year. Thankfully that wouldn't be the case this year.

The weather was teasing, suddenly turning sunny and dry on race weekend after weeks of rain. But race day started with a nice shower and then the day was mostly cloudy (until after the race when - during the SA national anthem - it started pouring so hard tents were collapsing - ah, Cozumel!).

The swim was weird - fast, slow, fast. Somehow we were caught by the women who started a minute behind us. And not just Jodie which wouldn't really be a surprise, but the whole group somehow. Anyway, out onto the bike (after picking Jodie up as she slipped on the wet paving through T1) and there was a big group together. I was caught napping as Terenzo Bozzone made his move and spent the next 20km paying for my mistake (lesson learned) as I red-lined it catching up to him, Matt Chrabot and Tom Davison.  But by then it was four of us away and we made sure to capitalize on our lead.

We came into T2 4mins up on the next guys, so it was up to us. Terenzo, Matt and myself ran together for almost 15km, and despite a quick pace, I felt just the way you want to feel at that point of a race - in control. Matt dropped back just before the final turn (at 16km) and I pushed on the pace to get a small gap to Terenzo. The last couple km's were hard, but that is to be expected I guess and I held on to my advantage to the line, coming in 40secs up on the 2013 70.3 World Champs runner-up. 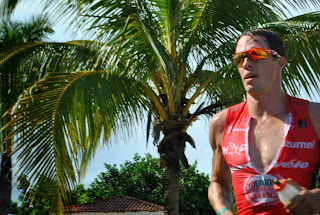 So now I go into the final three weeks to Kona exactly where I want to be - fit, healthy and confident. Of course I am tempering my expectations of Kona being that it is my first real crack at it (I am not counting 2009 for a variety of reason, but mostly cos I sucked) and am only 30 years young. But I do plan to give my best and we'll see where that puts us...